Three young girls on a mission that seems almost impossible! But impossible means nothing to them, they either die or try.

Taken from the TV Series, Sub Sahara, The film is an unorthodox story that highlights the confusion and lack of urgency of pressing issues in our country. The movie is exciting to watch as the writer entertains us with comic relief and suspense.

I recently saw a movie, one that has got a lot of people talking and might I add that most of the response towards the film, well, let’s just say it wasn’t what everyone expected. This is not a review, I’m simply stating a few things I observed when I watched the movie. I’m talking about Namaste Wahala.

First of all, I’ll say the trailer of Namaste Wahala was well thought out, it created the buzz that got people anxiously anticipating the release. Yes, it was that good. It was so good that I almost believed the movie would be great, but I failed to heed the number one rule of movie marketing- never judge a film by it’s a trailer, silly me. Don’t get me wrong, it’s not like the movie is all bad, there are some things that I find interesting.

The storyline was sort of cliché, two people from totally different backgrounds fall in love and their parents oppose the union. Typical right? We’ve seen this play out in a lot of flicks, but again, what made the difference here is that the lovebirds are from two opposites, a Nigerian and an Indian. Is it just me or does anyone think the opening scene was kind of weird, they bumped into each other at the beach and that was it, boom- love at first sight, hmmm. Na wa o.

To cut the gist short, what threw me off my seat was the music, I mean, did they really have to make them sing? That’s like low-class Bollywood right there. And don’t get me started on the choreography, it was basic and uninteresting. Broda Shaggy was another disaster, as usual, the guy over-acted his role, it made it seem unreal and just plain annoying. There are things I like about the film though, the sound was great, the picture quality was amazing. Ini Dima Okojie gave a sterling performance, Ajoke Silva was good, no surprises there. RMD did well for an Igbo man too.

Like I said earlier, this is not a review, I noticed a few things and thought to share with you guys. Who else has seen Namaste Wahala? What’s your take on it?

RISE OF THE SAINTS

Rise of the saints is a movie inspired by the story of Moremi Ajasoro, warrior Queen of Ife who delivers her people from destruction in the hands of her sworn nemesis Jagan. In present day world, Her prophesied son is manifest in Luke, a young aspiring music artiste.

There’s no title yet for Daniel Craig’s final outing as James Bond, but fans did learn who’ll be joining him for his last ride as the British super spy.

Ralph Fiennes, Rory Kinnear, Ben Whishaw, Naomie Harris, Lea Seydoux and Jeffrey Wright will all be back for the 25th movie in the popular film series. That was announced in a special #Bond25 livestream that aired Thursday.
The announcement was made from Bond creator Ian Fleming’s estate in Jamaica, where Fleming first came up with the idea of 007. The movie will shoot in Jamaica, film producers said, as well as in Norway, the United Kingdom and Italy.
The livestream also revealed that Oscar winner Rami Malek will play the villain in the next movie. Actors Dali Benssalah, Lashana Lynch, David Dencik and Ana de Armas will also join the cast.
Putting Bond back in Jamaica gets the character back on familiar ground. The very first Bond film, 1962’s “Dr. No,” was filmed on the island, as well as 1973’s “Live and Let Die.”
Little was revealed about the movie’s plot, other than producer Barbara Broccoli saying that Bond won’t be on active service at the film’s beginning and that he’ll be “enjoying himself” in Jamaica.
.
.
Source: CNN

GOD CALLING: The Kind of Call That Defies Reality

The Kind of Call That Defies Reality

The movie takes us through the life of Sade, the rich daughter of a former military man. She is a stay at home mom with a precious daughter and a loving husband. She has a great social life and she looks like has everything she needs. However, she is a drug user and even though she has had the previous encounter with the substance, this use goes unnoticed until she experiences a heart-numbing tragedy and the weird things start happening.

This is one of the few faith-based movies we have seen in the cinema’s and I must say, it was definitely different. Would you pick up a call from God? That idea in itself, sets the movie apart and makes one wonder and imagine the possibilities of that happening. The movie is beautifully expressed and goes on to teach a lot of lessons.

Apart from the religious angle, the movie also touches a lot of important issues like loss, suicide, depression, drug abuse amongst others. These themes were beautifully portrayed and played out as we see our protagonist go through different phases.

The picture quality of this movie was so beautiful and clean, you could feel the life of the characters from a distance. Every scene was clean and beautifully shown, I have to commend them for that. Sound, however, was not on the same level with the picture quality and we noticed several issues through the course of the movie.

The special effects in this movie, deserved a standing ovation, and I heard people shouting and asking how they achieved it and when they showed us the third mainland bridge making at the end of the movie, some people clapped, because it did look so real. The gas explosion as well was so on point, it was almost as though you could feel it through the screens.

The acting in this movie was great, Zainab Balogun played her role as Sade really well, she really took us on a journey through her experience. The child actor that played her daughter Lola was remarkable, apart from the fact they looked like a real mother and daughter, he acting was really fluid and it flowed well.

I also like NkemOwoh and OnyekaOnwenu’s acting, it like we are facing a wave of old Nollywood actor’s comeback and we are loving it. RMD’s prosthetic leg, however, even though beautifully shown in the first scene, we couldn’t really feel it in subsequent scenes, his walk didn’t show us that he had a prosthetic and we could tell he was walking normally.

Everything put together, this movie is one of the best movies of 2018, it was indeed different and interesting in so many ways. On a side note, I was crushing on Jesus throughout the movie, by the way, if you’ve seen the movie, you will definitely understand. Lol.

A “loving husband (Adjetey Annan) and a faithful wife (Rabby Bray), make a perfect home with their children until it turns out that the wife has been a sociopath from day one. But she has been able to remain calm and has refrained from violence until she feels betrayed by her entire family.

His daughter, Oyindamola Adejumo Ayibiowu confirmed his death this morning on Facebook saying,‘goodnight, my great dad, Moses Olaiya Adejumo (Baba Sala). I’m proud to be your daughter, your legacy lives on!’. 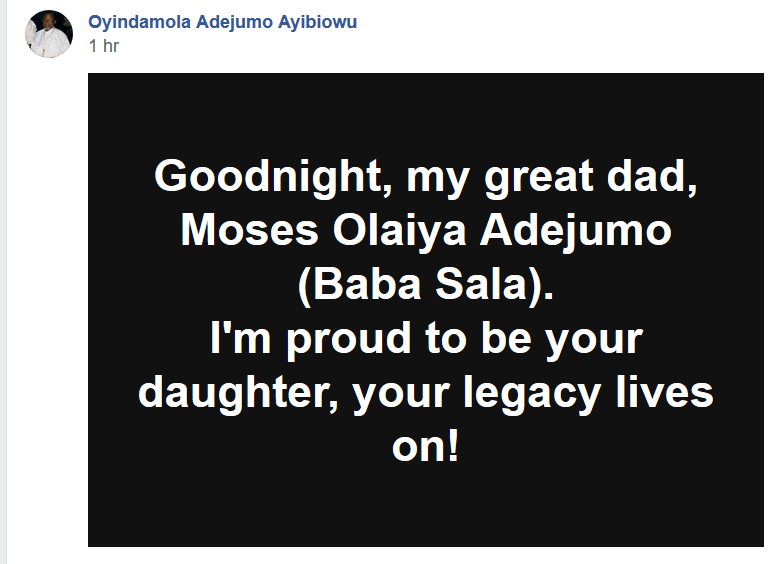 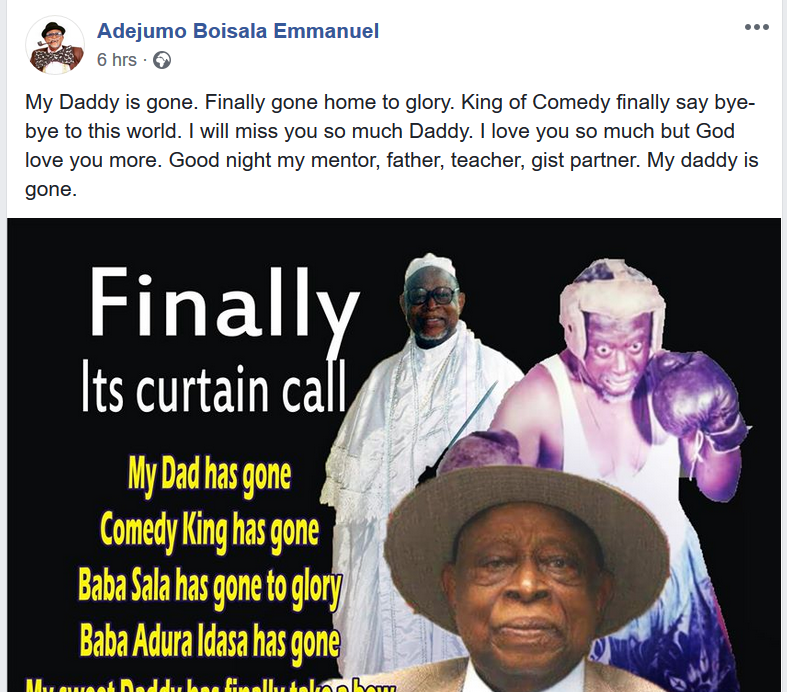 His remains has since been deposited at the Obafemi Awolowo University Teaching Hospital Complex Annex, (Wesley Guild Hospital) in Ilesa.

The late entertainment legend had struggled with his health in the last 4 years. He was diagnosed with stroke and spent a long time at the University College Hospital in Ibadan, Oyo state.

For the first time in history, an Ibo man and a Hausa woman will get together and fall in love in a hilarious way, despite their religious differences that will become world headline.

Is Yvonne Jegede giving advice to Harrysong on depression??

Beautiful Actress Yvonne Jegede Fawole took to her Instagram page to give an advice to entertainers on how to overcome depression, she also narrated how she reacts to negative comments on her post. 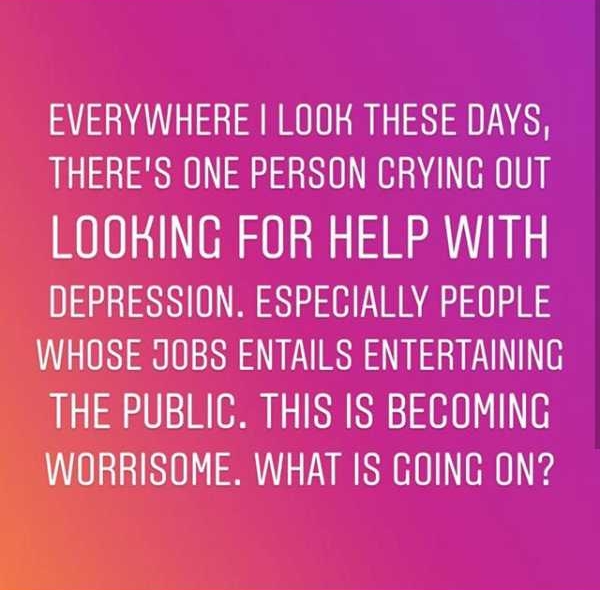 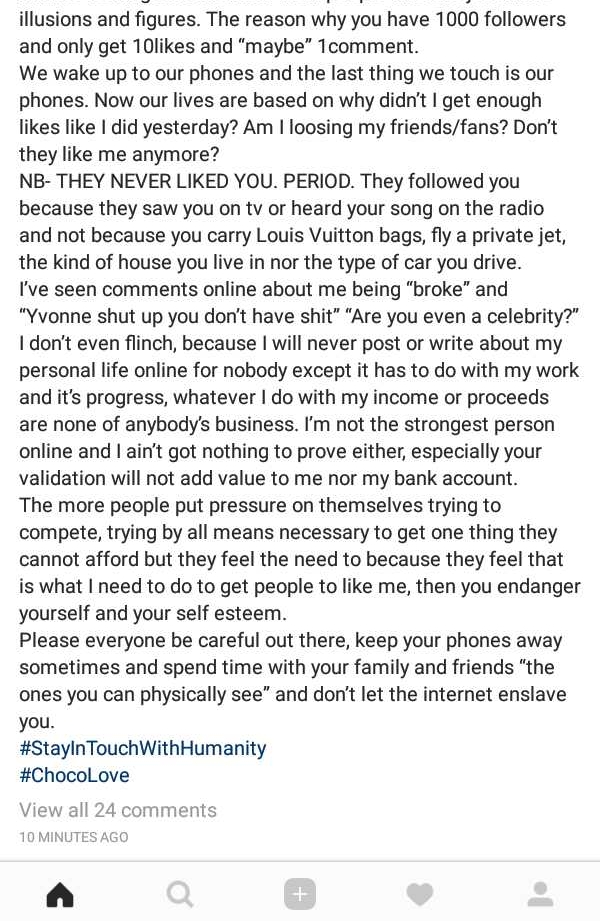