Judge tells Ubi Franklin and Lilian to Go And Enjoy Their Marriage.

On Monday July 8,2019 Actress Lilian Esoro and MMM CEO Ubi Franklin were to appear in court for their divorce to be finalized but alas something strange and unheard of in the history of divorce cases happened…. 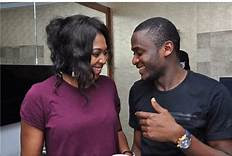 The Judge sitting at a high court in Ikeja held that their reason for wanting a divorce is not Valid and said that since Lilian confirmed that Ubi provides for their child and both of them are very good friends, then there is no reason for divorce..According to sources ”She tells them to say make Dem go settle their differences say nah small pikin dey worry Dem.
Stella nah so Judge take cancel the divorce ooh and everybody inside courtroom burst into laughter oh”
Actress Lilian Esoro and Music Boss Ubi Franklin got married in November 2015 and a few months later, things had fallen apart and the center could no longer hold and they parted ways without letting out why their union crumbled.
They both Co-parent their son and if the truth be told,Ubi and Lilian have managed their separation very well.
SOURCE: SDK
.